You are here: Home / Company Adventures / The Best Ice Cream in RI (According to Us)

The BuzzFarmers crew dances across Rhode Island on a sugar-high for the ultimate ice cream taste test.

You can’t judge a pizza place without trying their cheese pizza, and you can’t decide who has the best ice cream in a state, without testing the vanilla. And that’s exactly what we set out to do this summer. No crazy concoctions, no hot fudge or cherry on top, just pure vanilla love. If you put heart into your vanilla ice cream, it goes unspoken that every other flavor and crazy candy concoction you put together for other flavors will follow suit. Right? Right.

In honor of National Ice Cream Month, we decided to get crazy and test out every pint of vanilla ice cream in the state we could get our hands on. We were going to find the best ice cream in RI. But let’s be honest. This test was a little unfair. How could we judge ice cream? Isn’t it all wonderful?

The answer is yes! Every ice cream in our taste test was delicious! But we had to pick a winner. And so we did!

By some miracle, we fit all the pints and half-gallons in the cooler we had, and made it back to the office without a pool of cardboard cups floating in melted ice cream.

We intended to include Warwick Creamery in the list, but quickly realized they’re not open to the public and it wasn’t available at Dave’s Marketplace as promised, so we threw our hands up in the air and ventured on down to Narragansett for Brickley’s.

Each of the locations were about 20-30 minutes apart so we got a nice tour of our little state and didn’t hit a lick of traffic, even driving by Newport. Yay, Tuesday!

How we sampled to find the best ice cream in RI

First, you need to see what our freezer looked like, because it’s deliciously epic. We started at the top of the state with Lincoln Creamery. It’s been open for 30 years and has changed hands a few times. They won an award for their Peanut Butter Caramel Cookie Dough ice cream at the 2015 Rhode Island Food Fights Incredible Ice Cream Throwdown but customers go ga-ga for their homespun Frozen Yogurt, made with real fruit.

Lincoln Creamery didn’t win the taste test, but it was my personal favorite. Here were some other thoughts from the team:

If you’d like to get a scoop yourself, Lincoln Creamery is located at 276 Front St. Lincoln, RI 02865, and is open Monday thru Sunday, 12pm to 10pm (they may close early due to weather so be sure to double check if it’s raining) and you can find them online on @LincolnCreamery, Facebook, and Instagram. Three Sisters is an organic little cafe on Hope Street in Providence, known for their homemade ice cream. When we asked locals on Twitter which places we should go, Three Sisters was at the top of the list. Three Sisters started off as Maximillans and with a new owner in 2008, Michael Stern brought Three Sisters. They’ve won a People’s C
hoice Award and also won second place in the Rhode Island Food Fights Ice Cream Throw Down with their Kulfi ice cream (cardamom, cinnamon, pistachios).

Some thoughts from the BuzzFarmers squad:

If you’d like to get a scoop yourself, Three Sisters is located at 1074 Hope Street, Providence, RI 02906, and open 7am to 10pm. You can find them online at @threesistersri and on Facebook. Some thoughts from the BuzzFarmers crew:

They have 11 locations and you can find them online at @NewportCreamery and Facebook. Their pints are hand-packed on the spot, which fortunately for others but not for us, are way too overpacked to close the lid. So, truth be told, we had to taste this one early to make the lid fit and prepare it for the rest of the trip.

Some thoughts from the BuzzFarmers clan: Susanna’s Ice Cream is technically French Vanilla Bean and although we were being purists with the vanilla, Samantha doesn’t have plain labeled vanilla, this is her vanilla. And a delicious one at that. It’s sold only at Sweet Berry Farm in Middletown, RI (below). but she sells at two farmers markets on weekends, Casey Farm and Hope and Main. She has been known to sell directly to people that inquire, but Sweet Berry is the only shop she sells in.

Here’s what the Buzzfarmers’ team had to say:

If you’d like to get a scoop yourself, you can get a pint or a cone at Sweet Berry Farm (below) in Middletown, RI. You can find her on Facebook, too. Sweet Berry Farm was founded in 1980 by Jan and Michelle Eckhart. They’ve won an award for Favorite Farm Stand 2014 and 2015. Sweet Berry Farm is one of our favorite food stands because they’re always stocked with fresh local veggies and berries when they’re in season. They also have coolers full of fresh charcuterie and cheese which we indulge in when we’re feeling rich. At Sweet Berry Farm, they serve Susanna’s Ice Cream, but they also make their own ice cream. We thought maybe Samantha just white-labeled her stuff for SBF (we’re friends now, we can call them SBF), but the ingredients were drastically different, so this is definitely a different ice cream.

If you’d like to get a pint, Sweet Berry Farm is located at 915 Mitchell’s Lane, Middletown, RI 02842 and open 8am to 7pm. You can find them online on Facebook. ray’s Ice Cream in Tiverton is famous in Rhody and those who grew up here have fond memories of going there for a cone and petting the cows outside. We liked their setup. You walk into the General Store, and you’re faced with a wall of ice cream. A wall of ice cream? Yes please … and thank you.

Gray’s was Pat’s favorite, but the rest of the BuzzFarmers had some thoughts too: The Daily Scoop in Barrington, was another favorite in our taste test. The Daily Scoop was founded in 1999 by Bob and Deb Saunders. They’ve had mentions in The Huffington Post and in the Boston Globe. Customers go ga-ga for their coffee oreo flavor.

If you’d like to get a scoop yourself, The Daily Scoop has two locations: 230 County Road, Barrington, RI and 446B Thames Street, Bristol, RI and they’re open 12pm to 9pm. You can find them online on Facebook. Bliss is located in Massachusetts, but it’s Attleboro, aka Northern Rhode Island, so we included them. Plus, half the ice cream stands around Rhody serve Bliss so it was only fair. Rhode Island businesses support them, and so do we!

Bliss had an early start as a dairy farm in the late 1800’s when it was called Locust Grove Farm. But Bliss Bros. Dairy, Inc was created in 1924 by Thomas Kent Bliss, Sr. and Eva Palmer Bliss. They had a 15’ by 15’ ice cream stand that they built right next to their home. They’ve been recognised for their ice cream by The Boston Globe and The Sun Chronicle and customers seem to love their Coconut Almond Bar Crunch and Sugar Free Caramel Pecan.

Some thoughts from the BuzzFarmers team:

If you’d like to get a scoop yourself, Bliss is located at 711 Park Street, Attleboro, MA 02703 and open Monday thru Sunday 7am to 10pm and you can find them online on Facebook.

Oh wait, you want to know the winners?

To be honest, I have no idea how we made it around the state without the ice cream melting on a 90 degree day. Success resulted from a mix of ice, coolers, and optimism.

The downside was that we got to visit some of Rhode Island’s greatest little towns, but had to say “hi” and “bye!” super fast, so that the ice cream wouldn’t melt. It truly was a work trip! Really! Serious business!

The best ice cream in RI, by a massive majority, was Susanna’s Ice Cream with 57% of our votes. We also happen to love her simple ingredients: Cream, Sugar, Egg Yolks, Madagascar Bourbon and Tahitian Vanilla Beans!

Other top picks were:

If you’d like to take the same ice cream road trip we did, here’s the map! Enjoy! 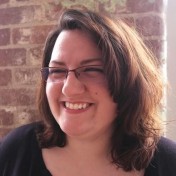 Mary Raymond is the manager of the Lantern office. She wears many hats to make sure HR, billing, budgeting, bookkeeping, and payroll all run smoothly. Fun Fact: Mary is super-knowledgeable about all things edible. She also enjoys making people laugh, which is a good thing, because she does it all of the time.